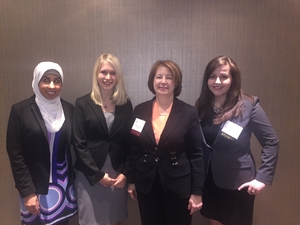 Partner Stephanie Scharf, was the featured speaker at a reception held by the Women’s Mentoring Program of the University of Chicago Law School on April 7, 2016 in downtown Chicago.  Ms. Scharf, who received both a doctorate and law degree from the University, spoke about ways for women lawyers to frame positive and satisfying careers.  As part of her remarks, she reviewed the substantial progress that has been made by women in the law and also looked ahead to the changes she sees on the horizon.  Ms. Scharf is one of the nation’s leading lawyers for advancement of women in the law and is well known for her publications and research about advancement of women.  Pictured (left) is Ms. Scharf with the 2015-2016 student leaders of the Women’s Mentoring Program.