At the 105th Annual Meeting of the Women’s Bar Association of Illinois on May 30, 2019 Stephanie Scharf was honored with the WBAI Myra Bradwell Woman of Achievement Award recognizing her significant contributions to advancing women in the legal profession and joining a distinguished list of past recipients including the Honorable Ilana K. Rovner, the Honorable Rita B. Garman, former Attorney General Lisa Madigan and the late Senator Dawn Clark Netsch.   Newly elected WBAI President Corinne Heggie presented the Myra Bradwell Award to Ms. Scharf.   Over 800 members of the judiciary, government, corporate law departments and international, national and local law firms attended the WBAI Annual Meeting at the Hilton Hotel in Chicago and joined in a standing ovation as Ms. Scharf accepted the Award.

Ms. Scharf was recognized for her leadership as Past President of the National Association of Women Lawyers and founder of the NAWL Annual Survey of Women in Law Firms and her current role as Chair of the ABA Commission on Women in the Profession and Chair of the ABA Presidential Initiative, Achieving Long-term Careers for Women Lawyers.  She has designed and conducted a broad range of empirical studies about women in the law.   Ms. Heggie added, “Stephanie’s research-based advocacy has paved the way for scores of women in the law to take their seats at the table.  Her work has made the legal profession a better place for women to transact and do business.  Stephanie is a standard onto her own.”

For over two decades Myra Bradwell pursued a license to practice law in Illinois.  Her challenge became her platform to advocate for women’s rights throughout the state.   Twenty-one years after she passed the Illinois Bar, Bradwell  successfully attained her goal and in 1890 became the first woman admitted to practice law in Illinois.  In presenting the Award to Ms. Scharf, WBAI President Heggie stated, “Myra Bradwell and Stephanie Scharf are cut from the same cloth.  Like Bradwell, Stephanie’s dedication to women in the law is relentless.” 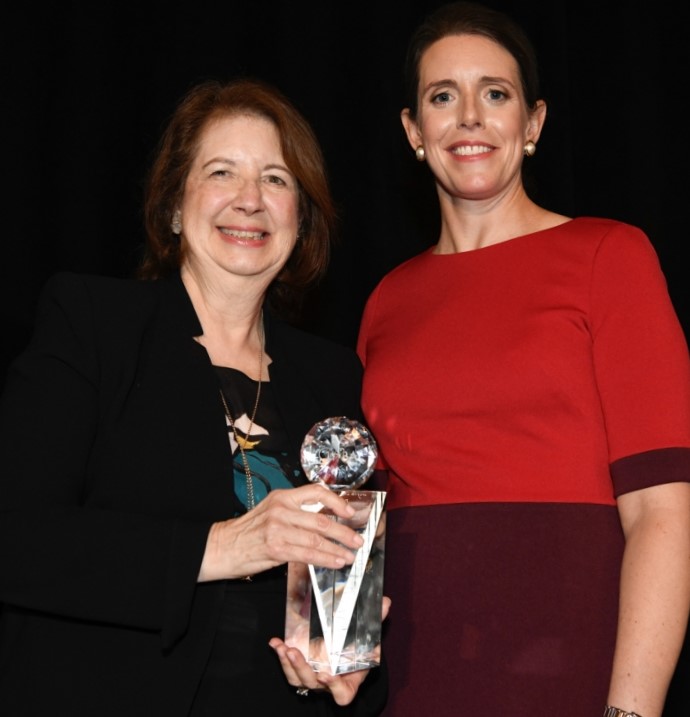 At the 105th Annual Meeting of the Women’s Bar Association of Illinois Stephanie Scharf (left) receives the Myra Bradwell Award of Achievement from WBAI President Corinne Heggie of the Wochner Law Group.